The below information is from Open Acoustic Devices, the manufacturers of the AudioMoth device.

What is an AudioMoth device?

An AudioMoth is a low-cost, full-spectrum acoustic recorder, based on the Gecko processor range from Silicon Labs. Just like its namesake the moth, AudioMoth can listen at audible frequencies, well into ultrasonic frequencies. It is capable of recording uncompressed audio to microSD card at rates from 8,000 to 384,000 samples per second. 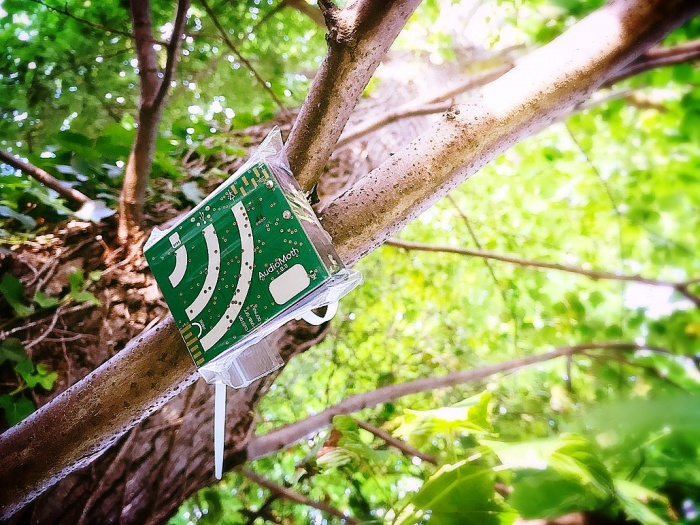 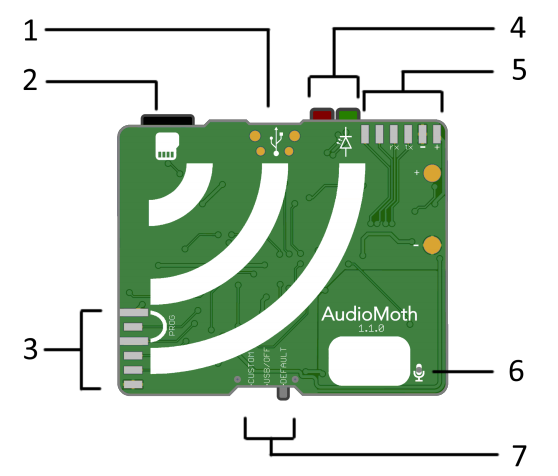 1) USB port: Connect your AudioMoth to a computer using a standard USB micro B cable.

3) Programming header: A series of pins which can be used to apply firmware to the AudioMoth.

4) Status LEDs: A green and a red LED used to communicate the status of the AudioMoth.

5) Exposed GPIO pins: A set of general purpose pins which can be used to communicate with and power external modules.

USB/OFF: When the AudioMoth is plugged into the computer, this mode allows AudioMoth supporting software to communicate with the device and perform tasks such as configuring the recording schedule, setting the on-board clock, and applying new firmware. When not plugged in, an AudioMoth in USB/OFF mode is switched off, in a low power state, while still keeping track of the current time.

CUSTOM: If a recording schedule has been configured on a device, switching it to CUSTOM mode will start running the configuration. During periods defined by the recording schedule, the AudioMoth will a) alternate between recording and sleeping if cyclic recording is enabled; or b) record constantly until the period ends if it is disabled.

DEFAULT: If you wish to start a recording outside an applied schedule, switch to DEFAULT mode and your AudioMoth will start recording continuously.

Every AudioMoth recording is timestamped to let you know the exact date and time it was created. This timestamp is included in the file name in the format “YYYYMMDD_hhmmss.WAV”, as well as the metadata of each file. Each recording’s metadata includes information such as the recording date/time, the sample rate and gain level it was recorded at, the unique ID of the device which recorded it, and the battery level at the time of recording.

From AudioMoth firmware 1.5.0 onwards, a configuration applied to a device is kept even if power is lost. Only the current time is lost and must be reset before deploying in CUSTOM mode.

What should I set the Gain level in Configuration App?

If the gain is set too low, the target sound may not be audible in the recordings, if it is set too high, your recordings may clip and distort the original sound.

How many hours will my AudioMoth record?

The number of hours an AudioMoth will record depends on a combination of the capacity of your batteries, the storage size of your microSD card, the sample rate at which you are recording, and whether or not you are using triggered recording.

The AudioMoth Configuration app will calculate the energy and storage used per day once you have specified the recording period and recording/sleep durations. This appears at the bottom of the configuration app in every tab. Your recorder will stop recording either when it uses up all of the storage on the microSD card, or when its battery dies — whichever happens first.